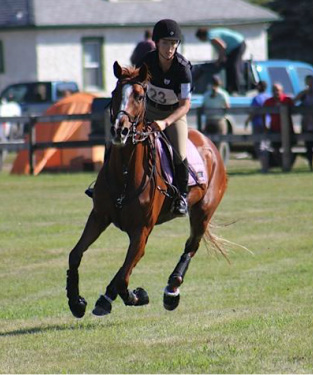 Samantha attended Marcus Oldham College in Geelong, Australia, where she graduated with a High Distinction from the Horse Business Management Course. She was awarded top awards in Horse Husbandry and Veterinary Care.

Her riding career began at 10 when she was first able to take lessons, and then never went without. At 14 she began training ponies for the hunter/jumper circuit and then moved on to the bigger horses. Competing 'A' circuit hunter/jumper under the watchful eye of Kitty Bowland and Amy Millar.

At 17 she began starting and breezing racehorses, which took her to Australia and New Zealand  where she is licensed for the track. Riding with trainer Richard McCubbin, Sam learned a lot on the starting of young horses. Through the racehorses came an eventing career which took off in Australia under training of several great instructors and clinicians including Olympic Gold Medalist, Blyth Tait.

Upon returning to Canada and remaining in the eventing world, dressage took on a new meaning and the study of the classical art began. Riding and training for Preston Rosedale Farm in Perth, Ontario with long time friend and coach Carolyn Rathwell, Sam gained experience in dressage and the eventing world. Competing in both eventing and dressage throughout that time and receiving her Equine Canada coaching certification.